← Who is Fides? The cupbearing Woman? She is the Whore of Babylon.
The Color Blue- The Aaronic Priesthood- Living on the Fringe → 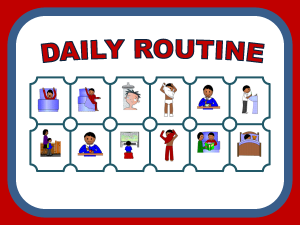 The Antichrist at the end of time is supposed to cut off the Daily “Sacrifice” according to the KJV and other newer bible translations. Guess what? The word sacrifice isn’t in the original text. It’s an insertion. It’s to throw you off from suspecting the Catholic Church from being  Antichrist. (They took control of all the publishing early on)

Well the first thing I thought about was NEWS. Censure ship.

Next I thought about routine. Everyday stuff you would normally do in  a day.

But the real meaning ,although the first two happened also, was that he actually rewrote

what a day MEANT!   He changed the clock! Hello?? Uh, as in Pope Gregory maybe?

A DAY according to YHWH begins at SUN down. Around 6pm. It was controlled by the appearance of the MOON…NOT the SUN. A Lunar calendar. It was also tied in with the rotation of the earth and the 360 degrees,  so the calendar had 360 days in it.

Well I’m not going to get into the whole calendar technicality issues,  but suffice to say that some MAN took it upon himself to change God’s way of measuring time. They renamed all the days and named them after their gods. Our word Hours comes from Horus. Sun SET comes from the god SET, Saturday comes from Saturn’s  day etc…(I have another post about all of this).

Well this itself it ANTICHRIST because it is against YHWH’s laws and ordinances. Whenever you change YHWH’s law to suit your own agenda,  that is the spirit of ANTICHRIST. Man playing God. I believe the verses are refering to men who agreed at the council of Nicea to change the days in which we’re told to  worship YHWH and reorganized not only the week, and day but the actual whole 24 hour period called a day to suit their pagan time clock and pagan practices. The whole GREGORIAN calendar comes to mind immediately.

They changed times and seasons and thereby could rewrite history and CONFUSE everyone as to YHWH’s agenda. And we all know who the author of confusion is!

YHWH put the law down in stone and he put the commandment to honor the Sabbath day  and to REST to keep it HOLY as a memorial to HIS creation. Our week was designed to mimic and commemorate the week of CREATION. To change it and defile it was SATAN’s way of working around YHWH and was a direct afront to the CREATOR GOD and his divine plan and time table. It’s a IN YOUR FACE BLATANT SIN against YaHuWaH.

The DAILY being taken away was just that in a nutshell. ANTICHRIST took away your divine ordinances and structure mandated by almighty GOD (YHWH), of how we were to operate and regulate our lives on a regular 24 hour basis to glorify HIM and maximize our Health and welfare in this world. So when you clock in Monday morning on that time clock you should be really PISSED!  Your a slave to the DEVIL!

You can thank SATAN Not YHWH. This was NEVER YHWH’s intention for how we should live our lives. It was Rome’s way to get more work and productivity out of you to PAY Caesar so they can live off of you.   PERIOD.  They want your first waking moments in their DAY, You slave. Get it??  They certainly don’t want your day to start with a family meal, prayer and fellowship in the evening when you can’t go outside and WORK the fields,  etc…  (for them).

You’d be wasting THEIR TIME. Get it??

← Who is Fides? The cupbearing Woman? She is the Whore of Babylon.
The Color Blue- The Aaronic Priesthood- Living on the Fringe →