Another Greenberg Production. Folks this shit is ALL a bunch of LIES. These are DRILLS. Get it?? The media is all co-opted. They are the terrorists! How can they do this?? They use PSEUDONYMS. These people aren’t who they say they are. They are being paid to LIE to You and they can legally do so!!

I warned you this Greenberg (Alissa?) would surface again with her

Dancing with the Footless stars scam.

Now here we go… She is the Granddaughter of Maurice Greenberg from AIG.

The Kaplans are another elitist Illuminati family

It’s all a CROCK of BS folks. Trick photography.

Need we say anymore?  Save your money and your sympathy.

The Boston Marathon Bombing was a HOAX.

Syrian Gas Attack HOAX- Backed by the Rockefellers. Assad is a Rockefeller. It’s all a LIE folks!

The book of Habakkuk. You need to read it! It’s a prophetic End Times Revelation about the CHALDEANS. I researched the Chaldeans and found they are a branch of the Babylonians that studied Hermetic magic and the black arts. It came down through the ages as NEO-(the Matrix) Platonism  and  Thelema  which is another word for Witchcraft.  Aleister Crowley was a Thelematist as were the founding fathers of the Rosicruceans and Golden Dawn adherents.

The Illuminati eye in the pyramid comes from Crowley who said he had an encounter with an angel that was HORUS the younger. Supposedly, a new age of Horus began in the 20th century. The new age movement and the Golden Dawn of their New Age. Do what you will is their motto…Liberty at all costs and no morals, justice, guidelines, whatever… To each his own. This is what they believe.

There sole objective is to become one with god and become equal to god at any expense. Same original sin as the Devil. This is called Henism. This word came up as HEN in an earlier post of mine and I didn’t know what it meant. Well now we know. They do not view anything that is  made of matter as divinely created  but rather dispensable. Hence human life is not valuable. It is a lower life form. Their creator god (The demiurge in 3 D) has an overseer god that is unknowable they say. THE god OF FORCES mentioned in the bible. This is what they worship as they feel everything is ENERGY and returns to the SOURCE. So essentially you are BATTERIES to be drained. Get it?? They feast off you and that’s fine. They are vampires in the purest sense and they have glamorized the whole vampire thing here recently to gain more converts to their RELIGION. (RA LEGIONS)

So what does this have to do with us?  The book of Habakkuk says that in the End Times the Chaldeans will run rampant. Hab 1: 8-17 gives a perfect description. Verse 8 describes DRONES.  verse 10 describes using SMART DUST and CHEMTRAILS. verse 14 describes the Matrix and Internet…. the WWW. How they have the nations held captive in their NET.Chap 3: 14 is HAARP. They love death. It’s just ENERGY DISPLACEMENT to them. More energy for them! More news stories. More 501C 3’s. More trust funds… Get it? Problem X reaction X solution…They cause it,  they react  to it, and they will offer the solutions….

Don’t fall for their lies. Don’t cooperate with their plan. Quit working for the government or corporate America unless its a small  local establishment.  We need to take a stand against these lying self centered bastards.

The book goes on to explain the apostasy behind Paul and his teachings in Chap 2. This will be another teaching. Suffice it to say that the globalist Satanists are the Chaldeans and they were comprised of scientists such as Plato and Pythagoras, so this goes way back. Their goddess they worship is NUIT the Whore of Babylon who rules the night sky. Another name for her was MAAT. Horus and the eye of HORUS that you see on all the Illuminati stuff factors in as well, as Horus was mentioned above. Crowley’s encounter happened in Egypt in a pyramid. The Nazi’s grabbed on to this as well as did the British Monarchy. They are all sucked in to the Ha Satan and his diabolical plan to lead millions astray with his lures of money, sex and drugs.

Suffice it to say, that our Elohim, YaHuWaH,  saw this coming and informed Habakkuk over 2600 years ago that these people would be coming down the pike. It goes back to Babylon. They are in the military, sciences, everywhere…These “people” have been totally lied to by these demonic entities. Paul was in there as well, hence the whole new testament APOSTASY from what Christ Yahushuwah taught.  Their is nothing new under the sun…This shit went down in the past and YaHuWaH will take it down again. He is not asleep. He is on top of it and shit is going to hit the fan here pretty soon.

Tags: chemtrails, Drones, Haarp and the WWW in the bible!

Ibragim Todashev- They are laughing their asses off people!

Another bullshit storyline by their own admission!

I’m  bragging all the hot air- what his name means… WAKE UP!

This interview from Occupy Wall Street in 2011 starts at the 5:38 Mark between Sir David Icke Branson and Maurice Greenberg’s granddaughter who is now playing the role of Adrianne Haslett Davis, the dancer who lost her foot at the Boston Marathon. All of these interviews are scripted and are Hollywood productions. She is wearing brown contact lenses in the dancer interviews. The lost limb is faked using camera angles and a totally fake wrapped leg. I bet she shows up on dancing with the footless stars! You can bet your bottom dollar they’ll be marketing the prosthetic limbs now to further their Transhumanism agenda. A perfect example of how they play both sides of the coin. These people are RICH…They are the 1% er’s…We also have a brief cameo appearance of Charlie Manson on the 00:17 mark holding up the “Fuck Mansanto” sign and no he’s not in jail. Another scam story. This shit goes way back in time….Hundreds of years just like she says… 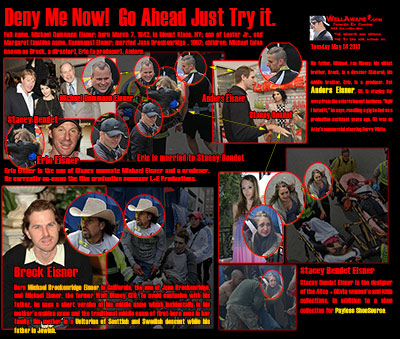