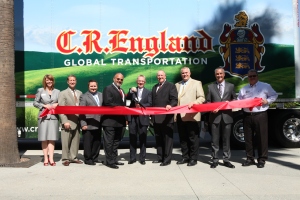 Does anybody know anything about this company?

I saw at least 30 Tractor trailers heading west on I-80. They all have the British Royal Coat of Arms on the side with Three Lions. Another company doing a lot of hauling was Prime, Inc. Wonder what’s inside those? Prime rib? Steaks for the Elite? I also saw about 20 more of those CAGE TYPE semi’s going west today. Lot’s of brand new Tractor trailer HEADS going west also and new flat utility trailer, tractors, and heavy equipment and large spools and large pipes. Also some Screws about 3-4 feet long!  ALL BRAND NEW on flat beds.

I also saw what looked like two space shuttle type things covered up with a tarp. Maybe NASA is going West also? The highlight was a military flatbed with armed guards on it. Maybe a warhead? It was long whatever it was. Oh- and very  large upright canisters of  some type of GASSSSSSS!! (About 5 feet around and 4-5 feet tall).

The other highlight  was what appeared to be a staging area just East of Cheyenne, WY around the 40 mile marker. It all went to one lane for several miles for NO REASON except that about 200 yards off the interstate was a parked train with lots of boxcars in the middle of nowhere.  The other lane looked completely paved but closed off so that if buses or Semi’s needed to park in there they could.

Something is indeed going down by the looks of it. I’m going to see who owns CR ENGLAND Transportation company. The Queen must like her FRESH FRUIT and NON-GMO produce delivered to the Royals Underground at Denver Airport. They must be having one Bunker Blast Party that’s all I’ve got to say.

I’d like to hear from you truckers! Surely you guys must be seeing all kinds of stuff!

Your delivering it for crying out loud! Come on- FESS UP!