← Psalm 118- Happy Passover! His name is YaHuWaH!
The Four Horseman of the Apocalype= FOUR STARS and their configurations!! →

The Four Blood Moons. The Queen of the Damned. Dan:7. 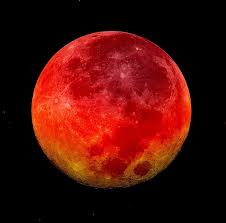 The Hebrew word for blood, dam, means ‘mother’ or ‘woman’ in other Indo-European languages (e,g. dam, damsel, madam, la dama, dame) and also “the curse” (damn).  It also is a reference to Menses, hence women get their monthly  “CURSE.  Therefore, the Biblical A-dam means  from a bloody EARTHEN (clay) cursed woman or mother.  (GAIA).

The BLOOD MOON therefore,  is the The Queen of Heaven. (The Evil Sister to the Earth) She is The Queen of the Damned. (ISIS/ISHTAR) and mother of the children of the NIGHT. The Vampiress.

Easter eggs, classic womb-symbols of the Goddess Eostre, (Ishtar/Isis) were traditionally colored RED and laid on graves to strengthen the dead.  This habit, common in Greece and southern Russia, might be traced all the way back to Paleolithic graves which were reddened with ochre, for a closer resemblance to the EARTH Mother’s womb (GAIA) from which the dead could be “born again.”

The Sumerian Great Mother (Tiamat) represented maternal blood and bore names like Dam-kina, Damgalnunna. From her belly flowed the four rivers of Paradise, sometimes called rivers of blood which is the ’life’ of all flesh. Her firstborn child, the 1st savior, was Damu, a “child of the blood.” Damos or ’mother-blood” was the word for “the people” in matriarchal Mycenae.

Another common ancient symbol of the blood-river of life was the red carpet, traditionally trod by sacred kings, heroes, and brides. This is the ‘The Royal Road’ – now favored by Hollywood celebrities, the royalty of our times. We roll out the red carpet because they are considered Royalty. They are royal BLOOD LINES.

The Bible also calls menstrual blood the flower (Leviticus 15:24), precursor of the fruit of the womb (a child). As any flower mysteriously contained its future fruit, so uterine blood was the moon-flower supposed to contain the souls of future generations. This was a central idea in the matrilineal concept of the clan.

In Satanism/Pagan Catholicism, The Virgin birth of the son of God, the seed of David, is symbolized by the Magdalene presenting the blood red egg. The egg is the son of god and the seed of David which as the nut from the tree (Pinecone/Pineal Gland) over the well is consumed and retained within the salmon (FISH/DAGON) which represents the vulva that resides beneath the womb or well. Christ simply means anointed one and derives from Messe, the act of anointing a Dragon Queen or King with the fat of the Sobekh or water dragon (crocodile). By understanding the dual meaning of Ichthos we comprehend that Ichthos as both Christ(anointed-messe) and salmon (fish) means “anointed Vulva of the Dragon Princess“, giving the meaning that her womb gives issue to the seed of god which is held in the virgin vulva (christ) which sheds its blood, and the seed, for the salvation of man. The body (ova) and blood (menses) of Christ (the sacred womb).

This anointed vulva can be also be found in the Song of Solomon. (Another book I’d personally trash- not of God!).

“My hands are on the lock of the door, my fingers drip with Myrrh” – Sheba.

The act of anointing signifies sacredness and holiness, that someone or something is set aside for some sole Holy Purpose. The anointed Vulva/Womb that itself anoints is set aside for a higher purpose that mere procreation. It is the Holy Virgin Grail which contains the Blood of Christ, the Blood of the Messiahs or Dragon Kings and Queens.The Virgin Birth was not a child, but a seed of a child and Christs (the Vulva’s) sacrifice of its body and blood for the salvation of man was the “birth” or flowing forth of the spent ova in the menses which, in the Eucharist, is symbolized by the Bread and Wine which, as we all know, must be consumed. Hence in Satanism they DRINK the BLOOD of the menses. In Roman Catholicism, it becomes BLOOD also when you partake of Communion through their doctrine of transubstantiation. Pretty sick shit.

The blood MOON signifies that the Whore of Babylon (ISHTAR/ISIS) is menstruating and getting ready to be impregnated to conceive. ISIS had 4 sons. (One of which was Horus). The Tetrad is showing us that history is getting ready to repeat itself in the Heavens. The Whore is ripe for conception this EASTER (ISHTAR).

These are BLOOD DRINKING VAMPIRES folks…

See my post on The FOURTH BEAST OF DANIEL CHAP.7.

← Psalm 118- Happy Passover! His name is YaHuWaH!
The Four Horseman of the Apocalype= FOUR STARS and their configurations!! →