← Christmas- A Pagan Holiday
Who Wrote the Bible? (His name Is YaHuWaH) The Origins of the Torah. → 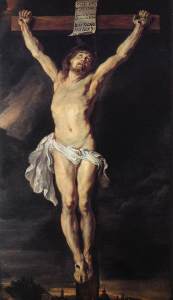 YaHuWaH wants me to set the time table straight on the order for the occurrence of these events. Many believe “Jesus” was crucified on a Friday which just does not measure out for the three days that he had to lie dead in the belly of the earth.

If we review the events leading up to his crucifixion we will easily see that our Savior died on Thurs. Morning at 9AM. The Jewish “day” begins at 6pm or sundown. We know by the scripture that Mary Magdelene went to the tomb on the FIRST day of the week (SUNDAY), early before sunrise,  and found NO body in the tomb– so the “LORD” had risen sometime on SUNDAY.   (after 12 midnight Saturday evening, but before sunrise at 6am Sunday morning.)

Working backwards that means he was “DEAD” (body was dead and buried) on Saturday day, Friday day, and Thursday day. Another way of calculating this is that he was “DEAD” Thurs evening, Friday evening and Saturday evening if you are using the SOLAR calendar. (Saturday evening would go till midnight, so he arose sometime between midnight Saturday and 6AM Sunday morning!)

They were in the Garden of Gethsemane on WEDNESDAY evening when he gets betrayed by Judas Iscariot and arrested. They were eating the Last Supper on a WEDNESDAY. This was NOT PASSOVER! Passover was two days ahead on FRIDAY AND SATURDAY. (Jews in Jerusalem celebrate TWO DAYS for PASSOVER and YaHushuWaH was to be the PASSOVER LAMB!) Another reason he had to die on the Thursday so as to be prepared for the FRI & SAT PASSOVER feast days which would begin at 6pm Thursday!

He spends Weds. night being accused and tortured and they sentence him at 3AM Thursday morning. All of the crucifixion happens AT NIGHT. The SUN should have risen the next morning at 6AM but- IT DIDN”T! YaHushuWaH is on the “Tree” being crucified at 6AM-9AM. (there was no “Cross”.) The “TREE” represented  the TREE of LIFE. It was in the shape of a “T” not an “t”. (Stauros=POLE). Romans crucified people on a “T” shaped structure- NO CROSS!

Darkness is over the whole area till 9AM Thursday morning!! That is when YaHushWaH gives up His “Holy Spirit” (no Ghost!) and his physical body succumbs to death. GOD CAN’T DIE FOLKS! This furthermore shows us that we are NOT our bodies.  It was unusual that it was dark outside according to scripture, so it should have been daylight when he died. (If he died at 9pm this would not have been the case!)

They spend Thursday day preparing him for burial and entomb him before 6pm on Thursday.

Hence, he is in the belly of the earth

I hope this clears up the confusion. YaHuWaH knows how to count…..

It’s too bad people, scholars and the “CHURCHES” don’t.

← Christmas- A Pagan Holiday
Who Wrote the Bible? (His name Is YaHuWaH) The Origins of the Torah. →