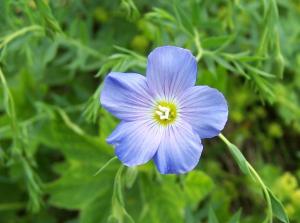 And the strong shall be as TOW, and the maker of it as a spark, and they shall both burn together, and none shall quench them.

“Tow” is a fiber of the flax plant stem. It is the weight of cotton, but has longer, stiffer fibers. It can be reused. In the early days of muzzle loading guns, “tow” was wrapped around the ramrod’s jag and used for cleaning the bore. Cased sets of antique rifles and pistols  included a hank of “tow”.  “Tow” is easily combustible and is recommended for tinder in starting fires with flint and steel. It is light brown in color.

I don’t understand what this has to do with Lisa but it does.

Lisa as we said before, is ISIS incarnate now.

Flax is used to make Linen and Damask fabric. Expensive  Egyptian “threads”…She has been on my thoughts of late so something is up with Lisa Irwin…I do believe she is being used in high children’s fashion  as I said before. I also believe she is a pawn being used by Raytheon/Thales and has been genetically and mechanically manipulated and engineered as an AI being along with her spiritual ISIS identity.

Now for the ISIS connection…

TOW  is the US Military’s guided missile systems produced by Raytheon Corporation which means “light from the gods”. A Luciferian Company.

FBI note> you might try looking for Lisa in Waltham, Mass….or Dulles, Va.

I’m sure they will be moving her around a lot though… It will take an act of “God” to find her.

Only YaHuWaH can deliver her at this point…