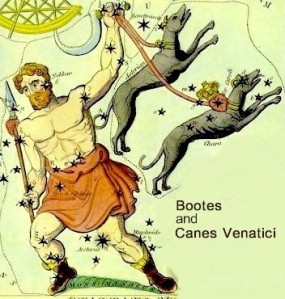 YaHuWaH has been nagging on me for three days to start talking about this— but I’ve been putting it off. I don’t know where He’s going with this as it is not clear to me. If you refer back to our Mazzaroth Post I posted last year you will see that this constellation, Bootes, has as it’s main star, Arcturus. The Bootes Constellation stands for “He who comes, also” so this person is not the Messiah but rather one who comes in the name of the Messiah or a false apostle perhaps? It also stands for he who guards the bears as they encircle  Polaris, the pole star. The Bear watcher. The bears as we mentioned in a prior post stood for Demeter’s daughter Callisto and her son Arcas, both having ties to Venus.

vs. 5- He transgresseth by wine. In Greek legend, Bootes is seen as representing Icarius, an Athenian who was taught the secret of winemaking by the god Dionysius.  Icarius  ( As in house of Judas Iscariot? ) then allowed some peasants to sample his produce, but his kindness back-fires. The men had become extremely drunk and were convinced that they had been poisoned, so they killed Icarius and buried him. His daughter Erigone and was so overcome with grief when she found his body that she hanged herself. Zeus transferred her to the heavens as Virgo, Icarius became Bootes, and Maera, the dog who had led Erigone to her father’s grave, became one of the Bootes canines.

vs 7- Bootes is the Shepard or Ploughman. He ploughs with the “Big Dipper” consisting of Ursa Major and chases the bears with the two dogs of Canes Vanatici. (Vatican?)   He carries a staff in one hand and a sword or sickle in the other. Arcturus is the star making up his knee or some say foot. Funny that the ‘apostle” Paul quotes Dionysius during his “conversion experience” on the road to Damascus. “Kicking against the pricks” is referencing the GOAD or stick used by a herdsman. It is used to keep the cattle or sheep in line.

The staff, ultimately figured as a Lance, gave rise to the name Al Ramih, which came into general use among the Arabians, but subsequently degenerated in early European astronomical works into Aramech, Ariamech, and like words for the constellation as well as for its great star .(Foundation for the word Aramaic?) This could also tie into the mythology of Sir Lance a Lot, as well, during king Arthur’s Knights of the Round ( zodiacal ) table.

vs 6. He that ladeth himself with thick clay. Clay is impervious to water. It holds water in vessels but it does not absorb water. It can carry the water (THE LIVING WORD)  but will never be one and immersed and enmeshed with it. During the age of Aquarius which we have now entered into, Earthen clay pots, clay tablets, etc, will be a prominent feature of the era. (i.e. Dead Sea Scrolls found in clay pots) Ganymede, the person depicted in Aquarius, which discussed in an earlier post on Pederasty,  is pouring the water out from an earthen clay jar. Clay also lacks certain metals but it is rich in Iron. The 10 toes of Daniel’s vision were iron mixed with clay, remember?

The Constellation Scorpio is also at play here. lambda Scorpii, the second brightest star in Scorpius  is also called Shaula (“the sting”- Paul’s original name was Shaul or Sheol of Tarsus). Scorpio is the sign of Judas Iscariot, as he kissed Yahushuwah with the stinging scorpion “kiss of death”. A scorpion sting mark looks like a kiss, hence the name. It is of no coincidence that the two constellations are related.  Lamb, duh?  is located at the end of the scorpion’s tail, marking the sting. Shaula is a multiple star, composed of a B-type subgiant, which is itself a triple star, and two fainter companions. (Timothy and Barnabas?) The primary star is classified as a Beta Cephei variable, a star that shows changes in luminosity because of pulsations on its surface. Shaula is approximately 700 light-years distant.

Paul, immediately after his conversion, goes to the House of Judas, remember? (Acts 9:11- I shit you not!) Didn’t you think that rather odd? It’s referencing Scorpio here..The House of Scorpio, the kiss of Death…Something is happening between Bootes and Scorpio in the heavens. Antares and Arcturus.

Arcturus is also associated with the Hermit in Tarot…Depicted wearing a cloak with a hood that covers him from head to feet; except for his face and hands he is completely undercover. Held up in his right hand is a lighted lantern, a walking stick in his left, with a serpent on the ground nearby. With his cane he taps and sounds out the earth as he advances slowly. Rather than kill the serpent he casts a spell on it so that it twirls around his stick suggesting that he works along with the lower energies. The lantern penetrates and searches out and reveals the inner quality of things, revealing just enough light and truth to be dangerous. He is an undercover agent working for and in sync with the snake!

Well that’s a start right now for this study on this topic. We’ll take this up again at a later time.

This is just food for thought for now…

Comments Off on Bootes, Arcturus, Judas Iscariot, and the Apostle Paul. Habakkuk Chap. 2

Tags: Antares and Judas Escariot, Arcturus and the Apostle Paul, Bootes and Habbakuk, Bootes and the Bible, Icarius, More on the Mazzaroth, Paul the Apostate Apostle. SAUL of Tarsus=SHEOL