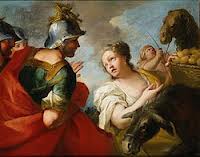 It amazes me how the women in the bible remain “Hidden” for the most part. This scene erupts while David has been hiding in the wilderness with his men because King Saul has been trying to kill him. He comes upon a rich landowner and herdsman named Nabal, and asks him for some provisions, as this is desert mind you. Not much to eat out there. The SOB basically tells him to hit the road…”I don’t know you. Why should I give you anything? Blah, Blah, Blah.”

Well this pisses David off to the point that he contemplates killing all of them that “pisseth against the wall” ( i.e. grown males).  Well, one of the young shepards goes to Abigail, Nabal’s wife and tells her (Maybe her son) and she quickly assembles provisions to take to David. She goes, as well, and when she reaches them she gets off her high society horse and bows to the future KING, and apologizes for her asshole of a husband. David is so impressed by her actions he ends up marrying her in the near future. When she returns to her husband, he is busy partying and getting drunk, so she waits till he is sober the next morning to tell him what she did. He ends up having a literal heart attack over it and dies in a few days from it. When David hears about it, he sends for Abigail and makes her his wife. So what’s the moral of the story here?

Ladies…do the right thing. If your married to an asshole and he tries to make you do something you know ain’t right, kick his ass to the curb! You’ve got the backing of the Almighty on your side. He’ll give you a righteous man instead, or make that asshole your married to righteous. One or the other!…

Abigail had UNDERSTANDING. She knew right from wrong. It’s up to us women to start calling the shots when it comes to Holiness. Quit being whores and prostituting yourselves to please some asshole excuse of a man. If the women would go back to setting the bar higher, the men would follow suit. Be a woman of valor and substance. Our society is counting on you. Stand up and get angry at evildoers. If you lose the jerk, So What?

Would you rather lose your soul?  You’ll be rewarded with a new husband…