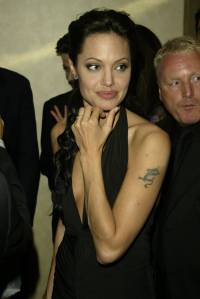 From the “PITT” of Hell
The Jovial Angel-note the dragon tattoo on her arm.

I got the word on this one this morning and it makes perfect sense that this ICON who works for the United Nations and champions the cause of HIV will be/is  the Black Horseman of the book of Revelation. The JOVIAL (Jove)  Angel from the “PITT”.  As the Mother “Goddess” Jolie is the highest profile/paid Illuminati actress there is and is known worldwide. The recent Mastectomy shows the Illuminati role reversal to do the opposite. Mother of course signifies  the BREAST and nurturer. Jolie is known for her un-motherly skills of action combat, BSDM & bloodletting interests, drama queen tendencies, unstable drug addicted past, life of multiple marriages, and bisexuality. She’s the perfect Illuminati design. She also has SIX children. Hum…Where have we heard that number before? Well,  you’re the first to get this scoop.

This  NIGHTMARE is our BLACK HORSEMAN.  Buyer beware!!!

P.S.> It would not surprise me if she is cast as ISIS/Ceres/Demeter/Semiramis  in an upcoming role for Hollywood. That’s how blatant these SOB’s are getting….
PPS> She is! Cast as the horned Goddess Hathor? (Isis as Hathor) in Maleficient.
Am I good or what? YaHuWaH Rocks! I shit you not I don’t even go to movies or
follow this shit…