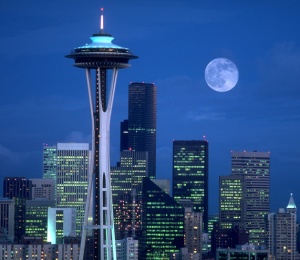 A powerful earthquake with a magnitude of 6.8 shook Seattle and western Washington state for 45 seconds yesterday – enough time to cause at least $1 billion in damage and send thousands of people fleeing homes, schools and offices.

But miraculously, hours after the 10:54 a.m. (1:54 p.m. EST) (1854 GMT) quake – considered strong enough to cause major damage and injuries – there was only one report of a fatality, although scores of people were injured.

A 66-year-old woman from Burien, a Seattle suburb near the airport, died of a heart attack following the quake, marking the first confirmed fatality after the temblor, local officials said.

Earlier reports identified the victim as a man. No other details were immediately available.

Seattle officials said about 25 people were being treated in local hospitals for injuries and that four were in serious condition after being crushed by debris. In addition, hospitals in Olympia were treating 35 people.

The quake struck the famous and the unknown alike.

It halted a speech by Microsoft billionaire Bill Gates, cracked the dome of the state Capitol in Olympia, sent bricks tumbling from historic buildings in Pioneer Square, the nation’s first skid row, trapped people at the top of Seattle’s landmark World’s Fair Space Needle, triggered landslides that plugged the river that delivers the city’s water and led to the temporary closure of the Seattle-Tacoma airport.

The quake also cracked the famous Boeing field where the aerospace giant tests its planes, cut power to 200,000 in the western part of the state, damaged windows at the corporate campus of software giant Microsoft Corp. and jolted the headquarters of coffee giant Starbucks.

Geophysicists at the U.S. Geological Survey in Golden, Colorado, put the quake’s epicenter some 30 miles (50 km) southwest of Seattle, and 10 miles (16 km) northeast of Olympia along the coast of Puget Sound.

The temblor was also felt in nearby cities such as Vancouver, British Columbia, and Portland, Oregon, and as far away as Salt Lake City, 700 miles (1,100 km) away.

Washington state Gov. Gary Locke declared a state of emergency, estimating the damage to roads and buildings in the billions of dollars. President George W. Bush vowed to provide as much help as he could.

Locke said damage was primarily structural. “A lot of overpasses and roads … have sunk,” he added, noting the governor’s mansion and Capitol building in Olympia sustained heavy damage.

Returning from a helicopter tour of the Puget Sound area, Locke said the damage could top $1 billion.

“There definitely would have been a lot, lot more damage,” if the quake had been centered closer to the surface, Locke said. “We’re just very, very lucky.”

The quake sent masonry from Seattle skyscrapers falling to the ground and knocked out power lines serving about 200,000 people, mainly in the Olympia area and nearby towns of Lacey, Tumwater and DuPont.

The Geological Survey first reported the earthquake measured 7.0, then reduced that figure to 6.8 – a size that still carries potential for major damage.

The quake’s substantial depth, estimated at about 30 miles (50 km), helped limit the damage. Earthquakes in California cause more damage because they usually take place closer to the surface.

Seattle sits on a fault caused by the Juan de Fuca plate sliding under the continental United States.